Epsiode #29 – The Role of AI in the Workplace – Michael Ashley

Today’s special guest is Michael Ashley, Owner and Creative Content specialist at Ink Wordsmith. Mr. Ashley is also a speaker and co-author of “Own the A.I. Revolution: Unlock Your Artificial Intelligence Strategy to Disrupt Your Competition.”  SAFFIRE LEGAL PC’s founder and principal attorney Teresa McQueen talks with Mr. Ashley about his views artificial intelligence and its impact on the workforce of the future. This engaging conversation delves deep into Mr. Ashley’s theories of how artificial intelligence may impact existing jobs while increasing our quality of life and improving certain professions.

“AI poses an opportunity for us to be more human than we’ve been before.”

Highlights From This Week’s Workplace Perspective:

Teresa McQueen, Esq.
Founder, Host and Executive Producer
Teresa is a skilled trial attorney (a recovering litigator!), Corporate Counsel for Western Growers Family of Companies, a published author and frequent speaker on a wide range of topics including harassment, discrimination and retaliation in the workplace. She is a Certified Business Etiquette Trainer and hosts the Workplace Perspective podcast to help organizations of all sizes develop and maintain successful employer/employee relationships.*

*The views expressed by Teresa McQueen are her own and do not necessarily reflect the views of Western Growers Family of Companies, its officers, directors, board members, employees, or members.

More from this show 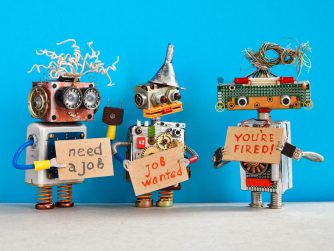 Today’s guest is Alexis Hultine. Teresa and Alexis discuss A New Hope: Remote Work. They discuss how remote work can be a positive...

The second guest in our Return to Work Series is Theresa Agovino, workplace editor for the Society for Human Resource Management. Teresa...

The first guest in our Return to Work Series is Susan Lund, partner of McKinsey & Company and a leader of the McKinsey Global Institute...